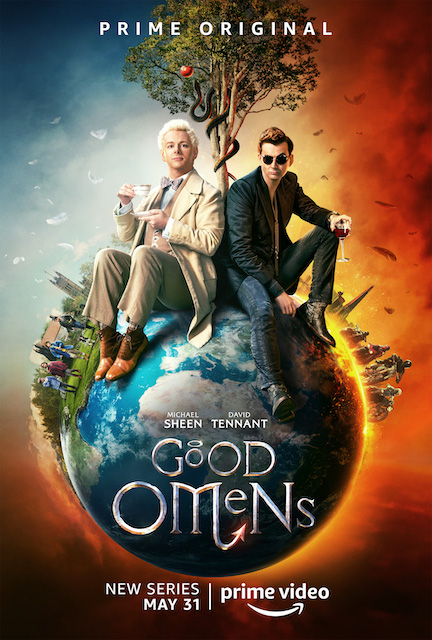 I spent my most recent TV-binging session watching Good Omens. This TV show is based on a 1990 novel by Neil Gaiman and late Terry Pratchett.

Amazon Prime Video released the six-part miniseries online on May 31, 2019. In less than a month, it invited its first controversy. A petition signed by 20,000 people called for the cancellation of the show. The petition quoted the irreverent treatment of some Biblical topics including the portrayal of God. This became news because the petitioners addressed it to the wrong company – Netflix instead of Amazon.

Crowley played by David Tennant is a fictional demon. He was the serpent who tempted Adam and Eve to eat the fruit in the Garden of Eden. Aziraphale played by Michael Sheen is a fictional angel. He was put in charge of protecting Eden with a flaming sword after their eviction.  Further to which, they both have been living on the earth for over 6000 years and gradually become friends. But in spite of being the representatives of Heaven and Hell on earth, they put aside their differences and collaborate to prevent an imminent apocalypse.

There are references to various characters and settings from the Bible like Adam and EveGenesis 3, the flaming sword, the angels -Gabriel and Michael, the Antichrist, the Beast, the Four HorsemenRevelation 6:1-2. But Good Omens is meant to be a fantasy comedy and I wouldn’t recommend taking any of it literarily.

Good Omens parodied the contradictory concept of a loving God of the Abrahamic religions and the apocalypse in a thought-provoking way. But some followers of Abrahamic religions (Judaism, Christianity and Islam) can perceive the show as offensive and distasteful because of the satirical portrayal of Biblical themes like original sin, angels vs demons, the apocalypse and even God’s gender.

The chemistry of Crowley and Aziraphale was fun to watch. The special effects were not bad at all. The subplots about the witchfinders and witches got me thinking about how of morality can be relative. The feminine voice of God did not offend me because it kept the show surreal for me. Good Omens did feel like reading a book because of its verbose dialogue delivery. But I like quick-witted comedy. If I had to say something negative, that would be about the paperthin character definition of the other characters in the show including the Antichrist.

VERDICT: I would give it a 4/5. If you have a good sense of humour then this is an interesting movie to watch. You are either going to laugh hysterically or ponder deeply on humanitarian and moral values.

This site uses Akismet to reduce spam. Learn how your comment data is processed.

People Who Visited Me